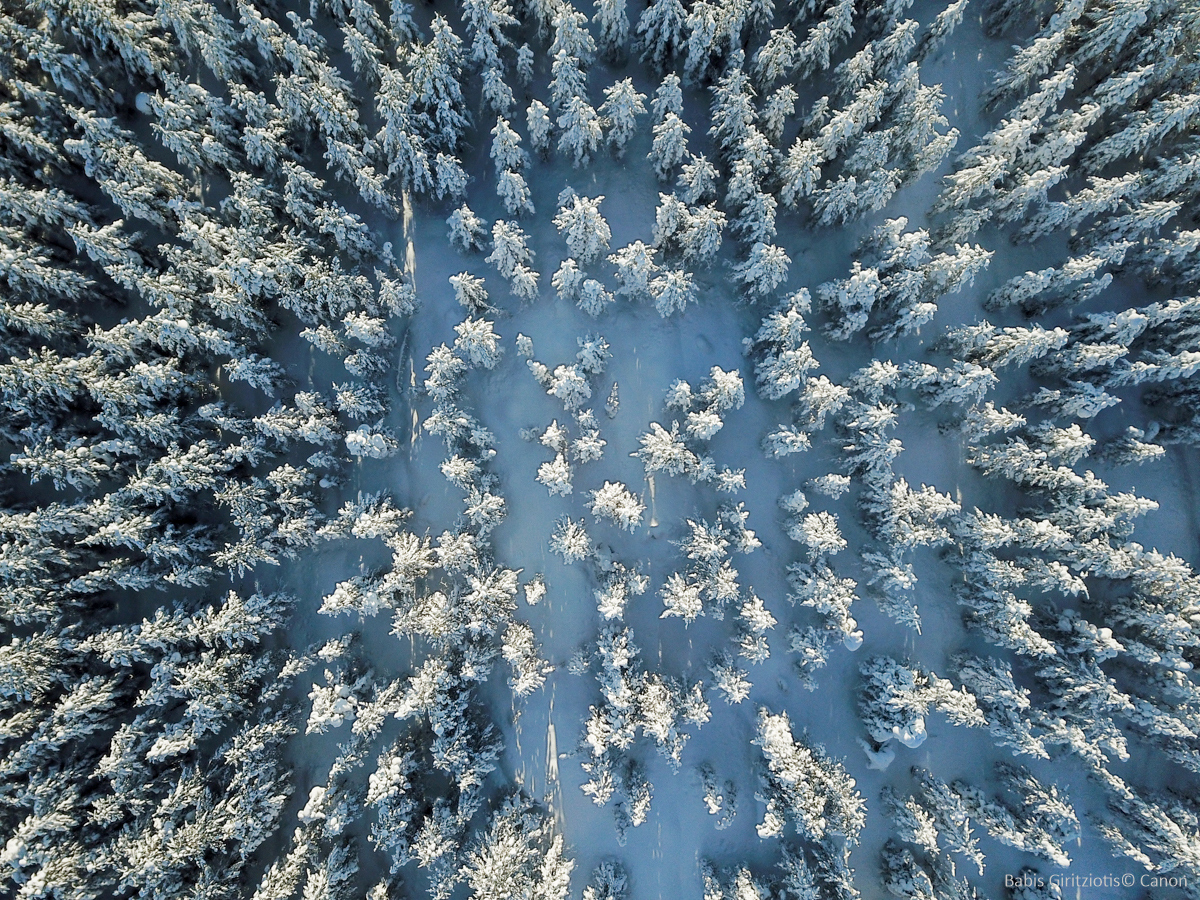 A very interesting trip and an amazing experience in freezing Finland came to an end a few days ago; now, sitting at my desk in Thessaloniki and looking at my photographs, a whole series of images, moments and emotions is replaying in my head. The Rovaniemi 150 endurance race, and the participation of two Greek athletes, Marios Giannakou and Chronis Mylonas, gave me the opportunity to travel to Finland and photograph their endeavours, as well as to photograph beautiful places that I have always wanted to visit. Before departure, the team was enriched with dear friends and partners, also entrusted with covering Marios and Chronis’s race. The team turned into a large group of friends, who returned to Greece victorious, but also enjoyed their stay, with endless forays into the forests of Lapland, long nights chasing the Northern Lights, and relentless teasing that helped to “heat up” the freezing conditions. 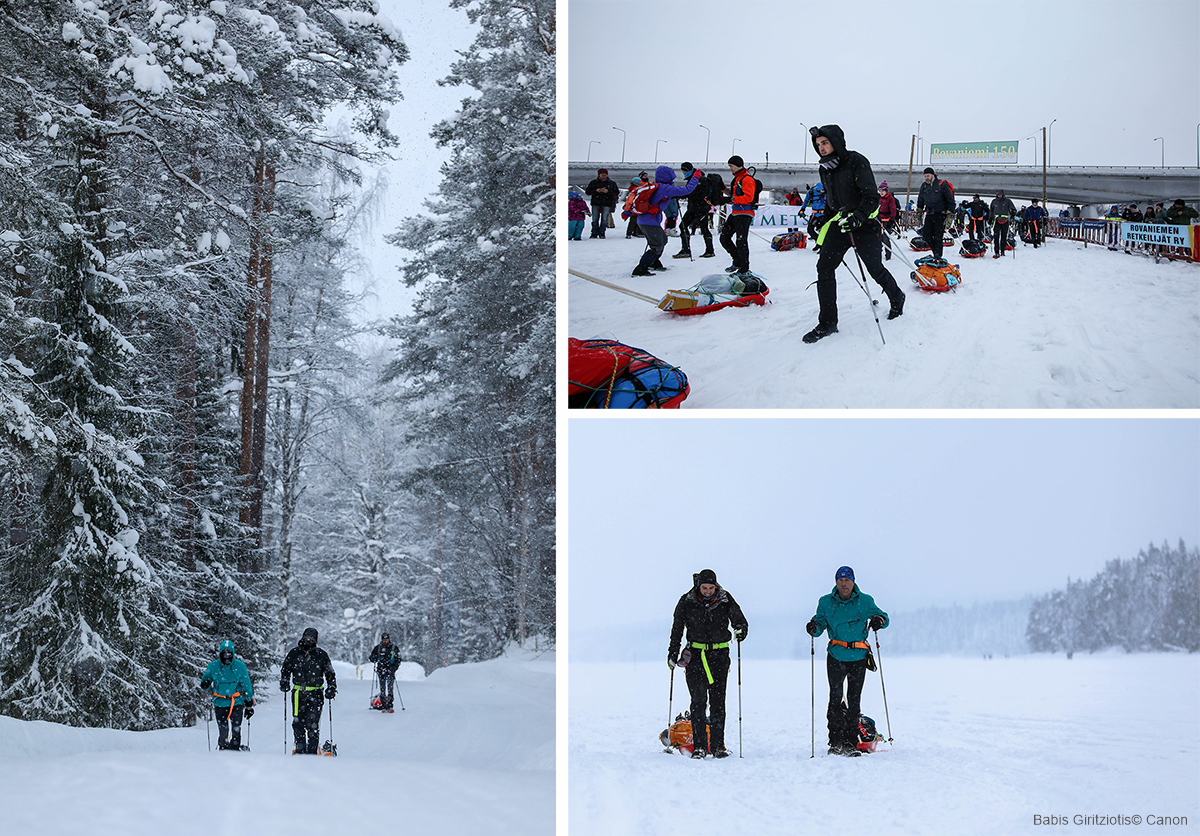 The race started on the frozen Ounasjoki river, the largest tributary of Kemijoki river, with a length of almost 300 km. On the morning of the race, the temperature was at -18 °C, low if you come from a Mediterranean country, but actually quite high by Finnish standards for the time of year; 1.5 metres of snow had fallen in the days leading up to the event. The gusts of cold wind blowing up the river made my fingers freeze in a few minutes, making it difficult to set up my camera for the first shots of the race.  We spent the rest of the day in the car, tracing routes and following side-roads in order to meet up with our runners.  We had to stop several times and look for ideal shooting locations, and follow the race trails on foot. The heat that we were able to enjoy inside the car dissipated in seconds, but the beautiful and simultaneously eerie landscape made us forget the tormenting temperatures and continue on our way. 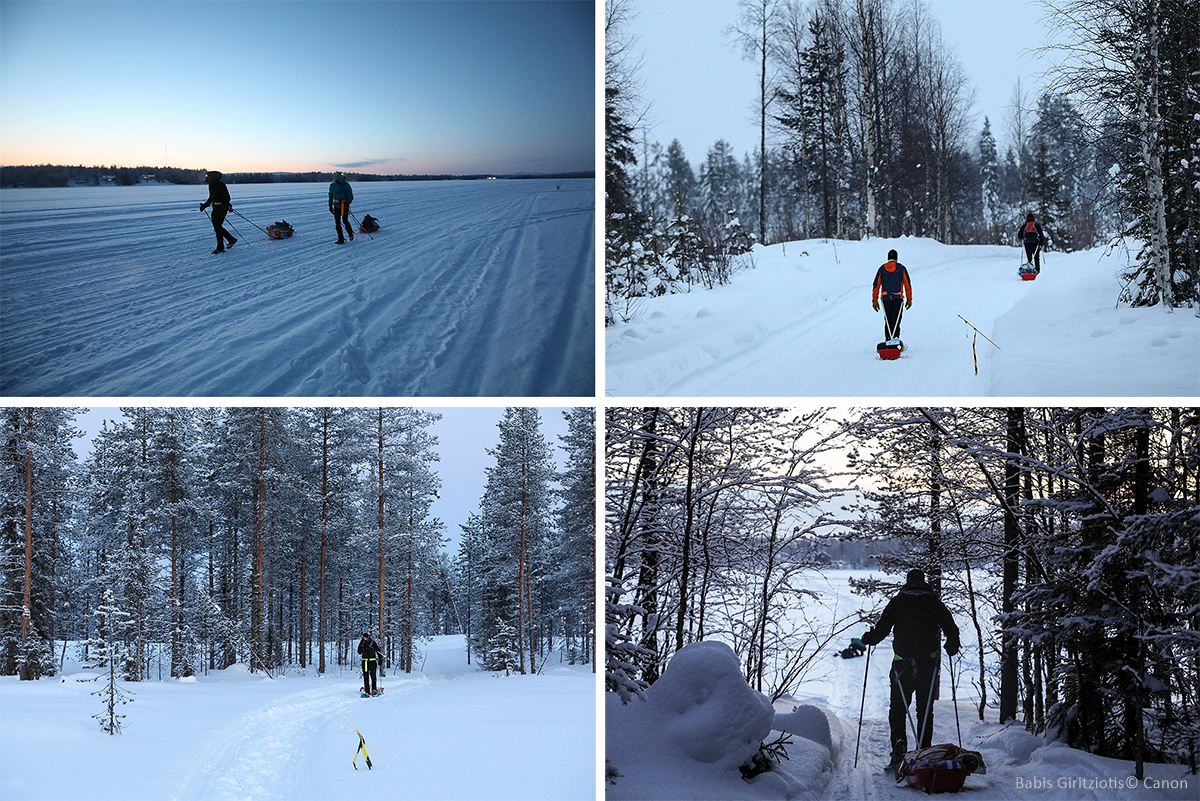 We caught up with Marios and Chronis just before 9 pm, at the last checkpoint of the first day, according to plan.  They looked quite well and ready to move on alone into the Arctic night that had already covered the forests of Lapland. We knew that they would be on their own entirely until the morning, and the only way of contacting them would be via our mobile phones. We spoke to them just before dawn, to get their bearings, and then set off to meet them. The temperature was at -23 °C. We left the car on the main road and continued on foot to find the trail and walk towards them. The forest was absolutely silent, and the fresh snow that was falling made the moment even more magical. Before long, we made out their approaching figures. It was apparent that the long night had taken its toll on them. We tried to lighten their mood by making a few jokes, and they were clearly happy for the distraction. We all knew that they were still only half-way through the race, with another frosty day and one more glacial night between them and the finish-line.

We followed the team throughout the second day. Giorgos Lentzas and I decided to follow the runners along the route for a few hours, to get some different footage and also to try and give them some psychological help. We soon realized that it was actually better not to talk to them, and so decided to shadow them silently. I was impressed by how much  they looked after each other. Just one word, or even a single glance between them was like a whole conversation, and we did not want do anything to jeopardise this relationship, which was born from their desire to achieve a common objective. 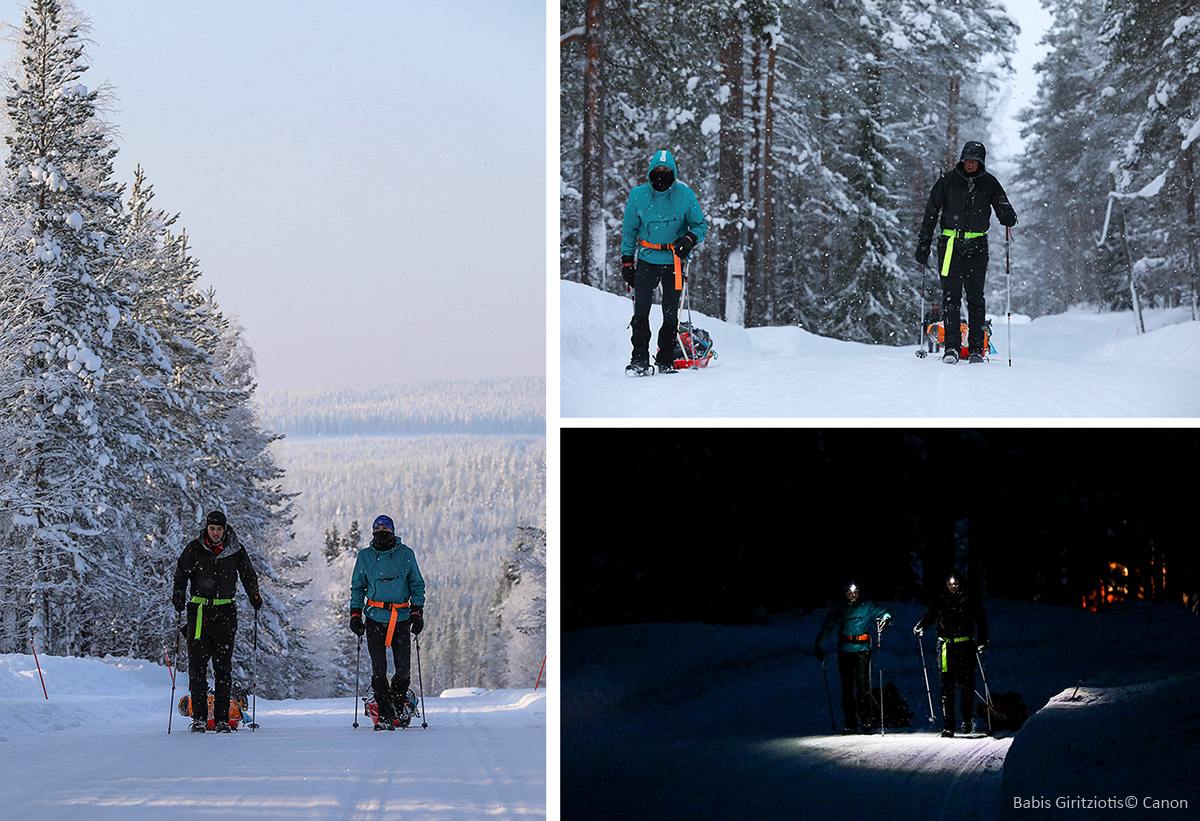 The last photograph of the race, just before darkness fell, was taken on lake Norvajarvi. Our athletes were in a permanent state of exhaustion, they hardly noted our presence at all, and it appeared that the only thing they could think of was the finish line. At around midnight, Marios and Chronis finished a 150-kilometre race, under truly gruelling conditions in the icy forests and over the frozen lakes of Finland.

The next day was dedicated to simply enjoying the guys’ success. We all deserved some rest, and the weather conspired to keep us inside, with dense fog covering everything around us. So we stoked the fire, lay back and listened to Marios and Chronis recounting their experiences from the long race. 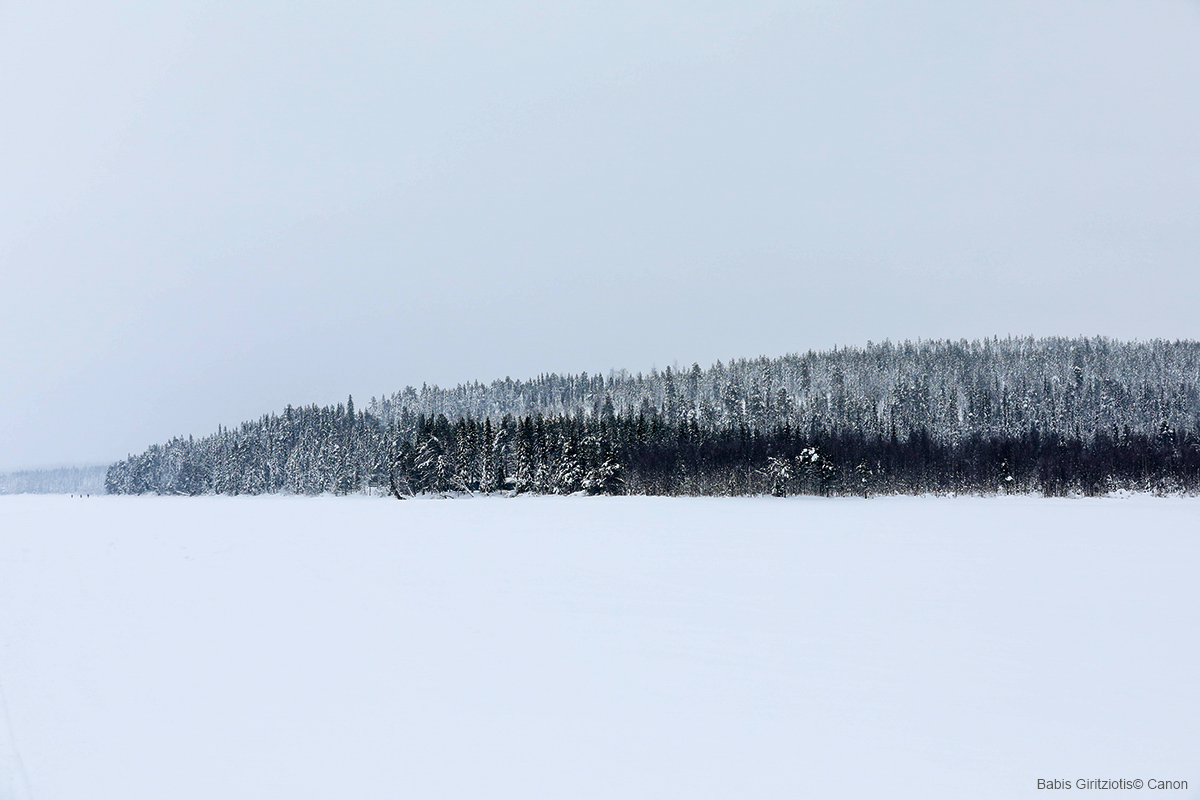 The first part of our journey was complete, but we still had a few days in which to explore and photograph the area. Our rented accommodation was a traditional home, located just a few metres off the shores of lake Norvajarvi.  For me this meant that I could just open the door, put my skis on and set off to explore the surroundings.

The gift I had been hoping for was granted to us, and generously. The sunny days that followed were ideal for photographs; but it was the nights that brought the magic: the clear skies allowed us to enjoy the Northern Lights in all of their glory. We were all ecstatic, and spent hours setting up our cameras outdoors, in order to capture the dancing lights above our heads.  It was truly a unique experience!

I would definitely like to travel back to the area, one visit is not enough for all that Lapland has to offer. Perhaps the next trip could be in the summer, when the melting snow will have revealed everything we could not see this time.

I am very grateful to Canon Greece, The North Face, Dynafit Greece, the mountaineering equipment store V15, Buff και JΟΙΝ Juice bars, for their help in making this trip a reality. Many thanks to Orfeas Kalafatis, Giorgos Lentzas, Giannis Sevastopoulos and Drossos Drossos for the excellent company. 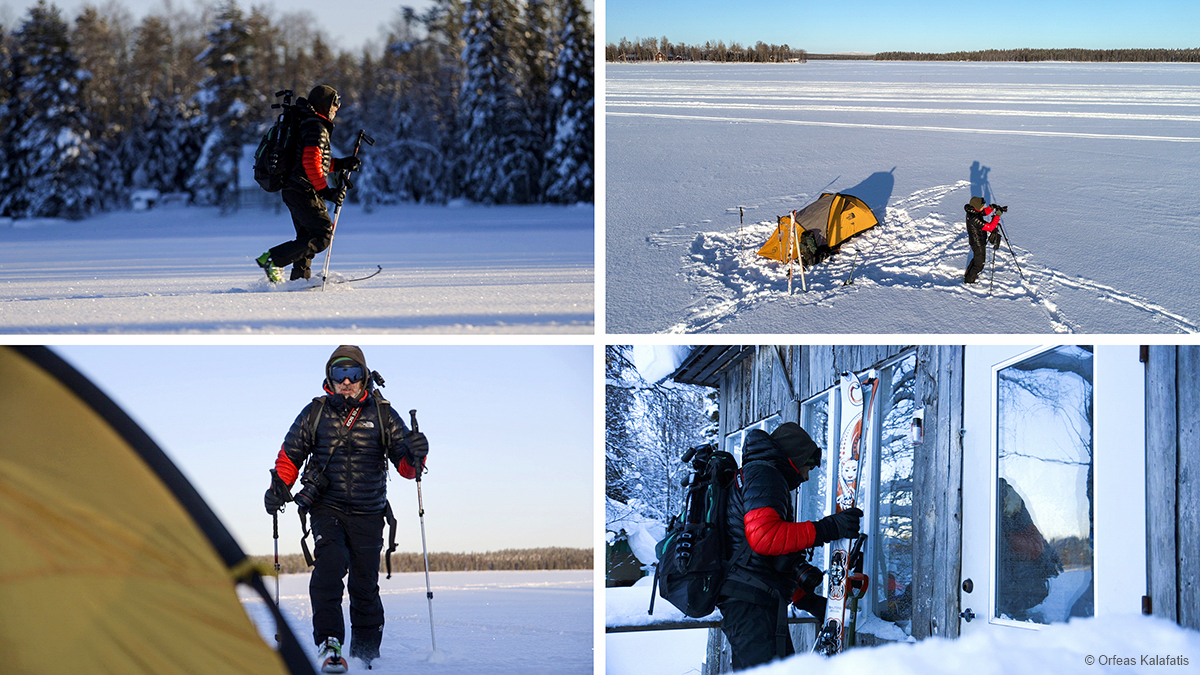 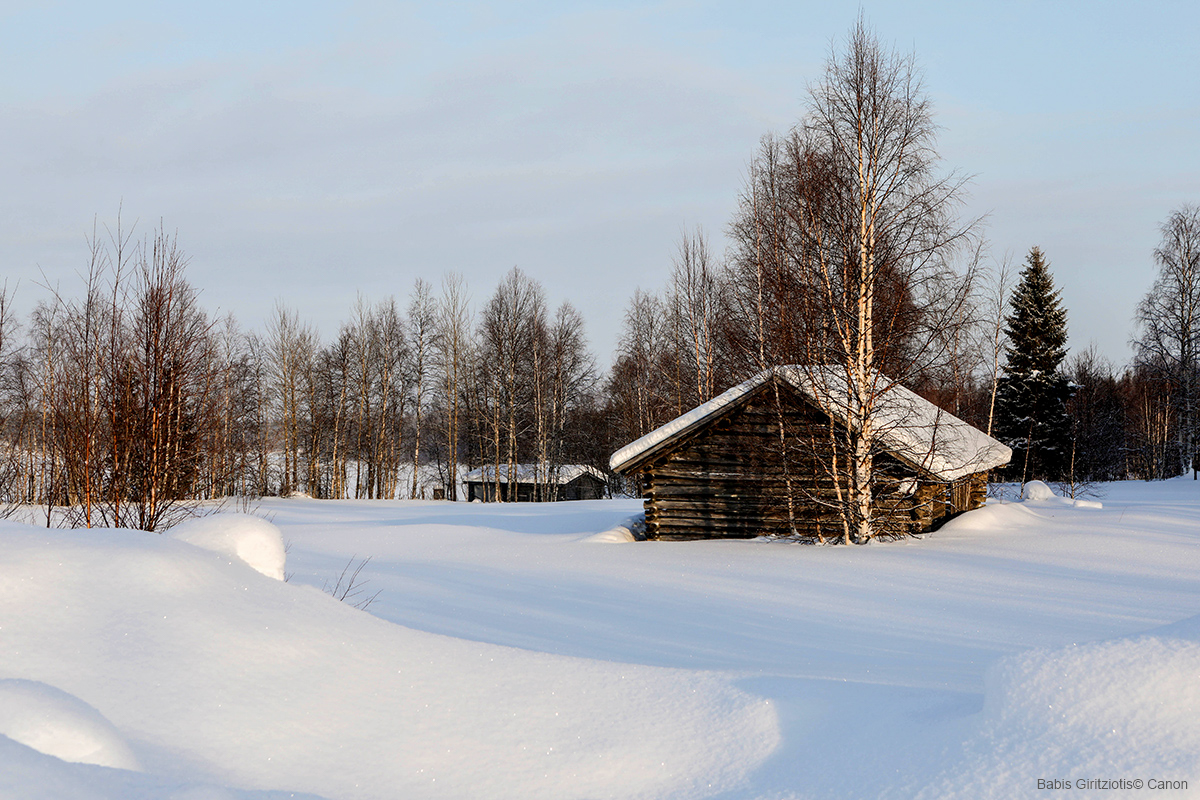 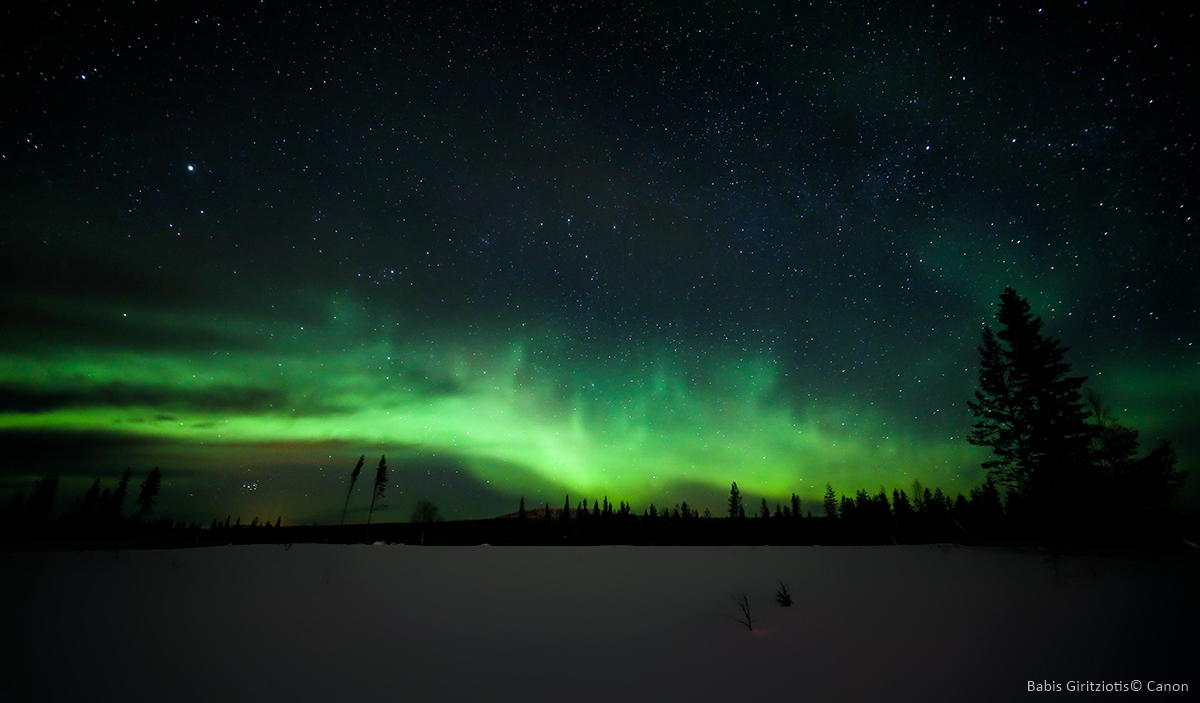 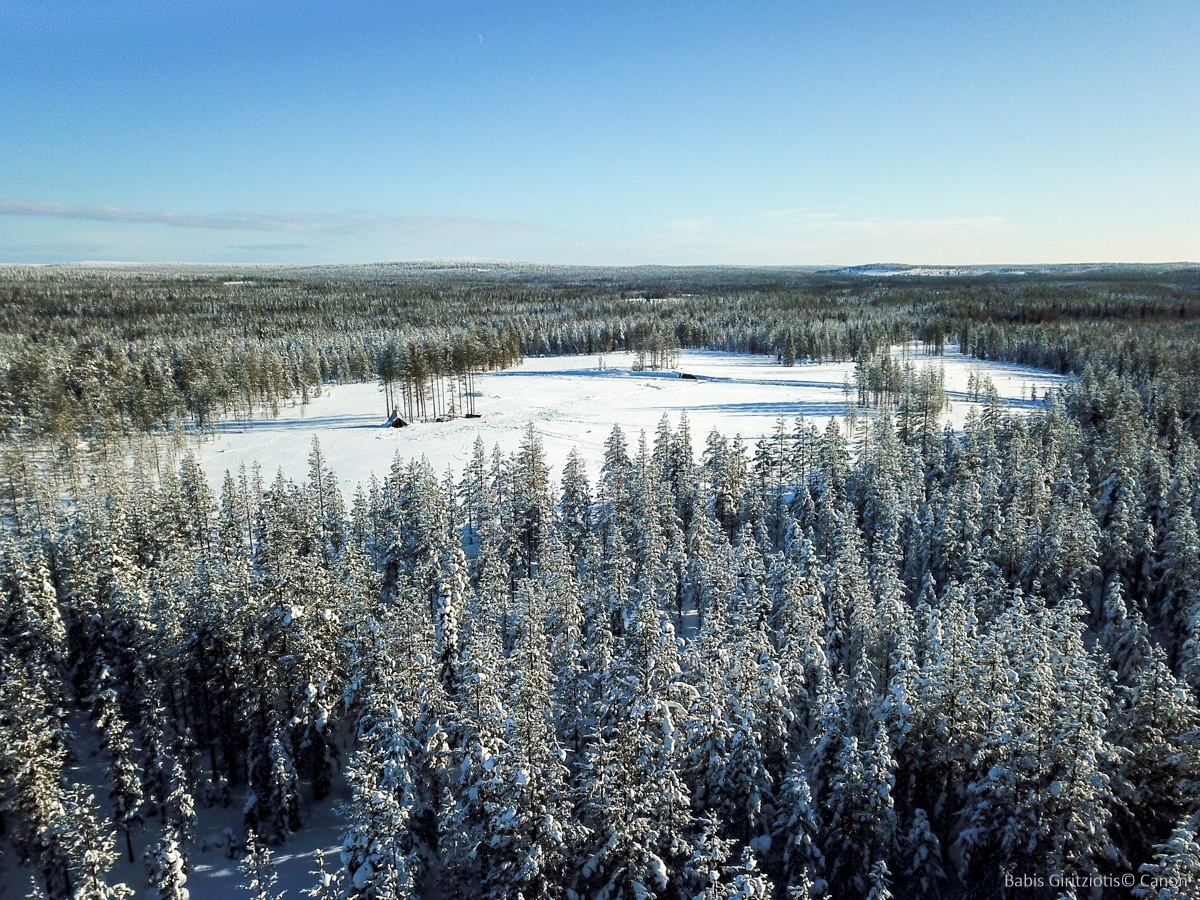 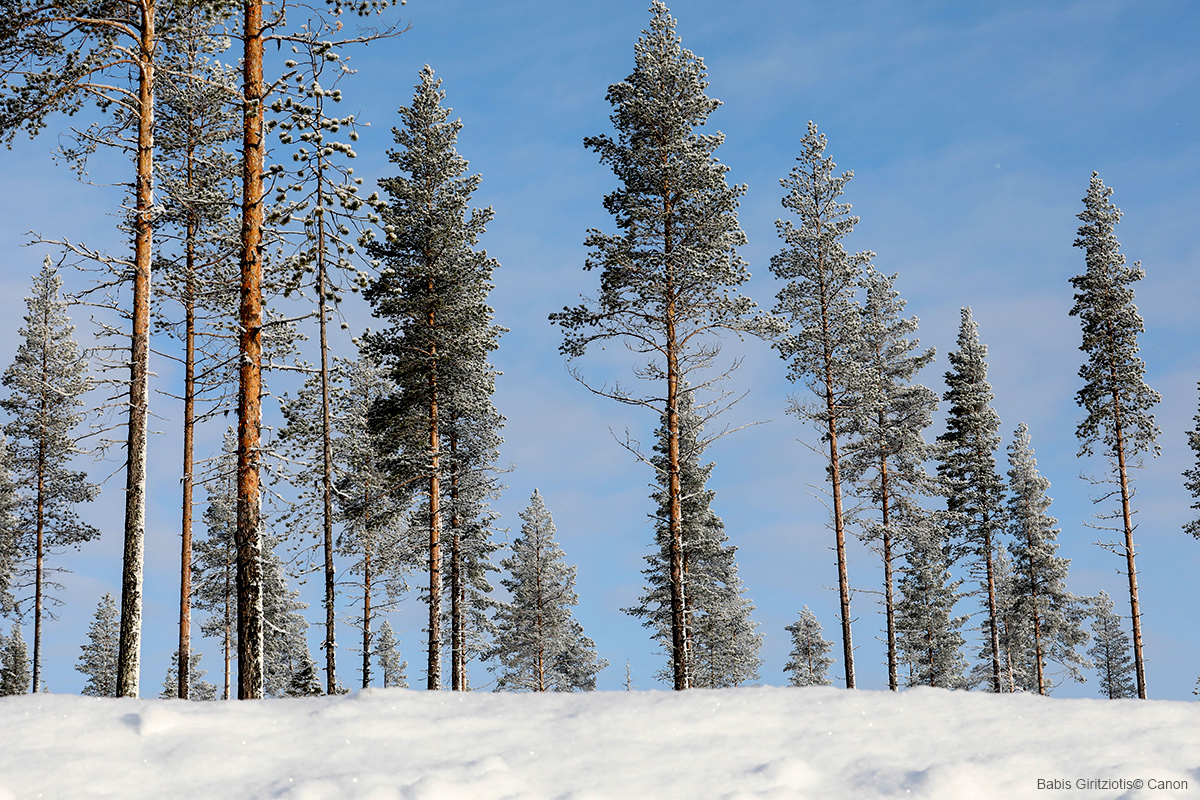 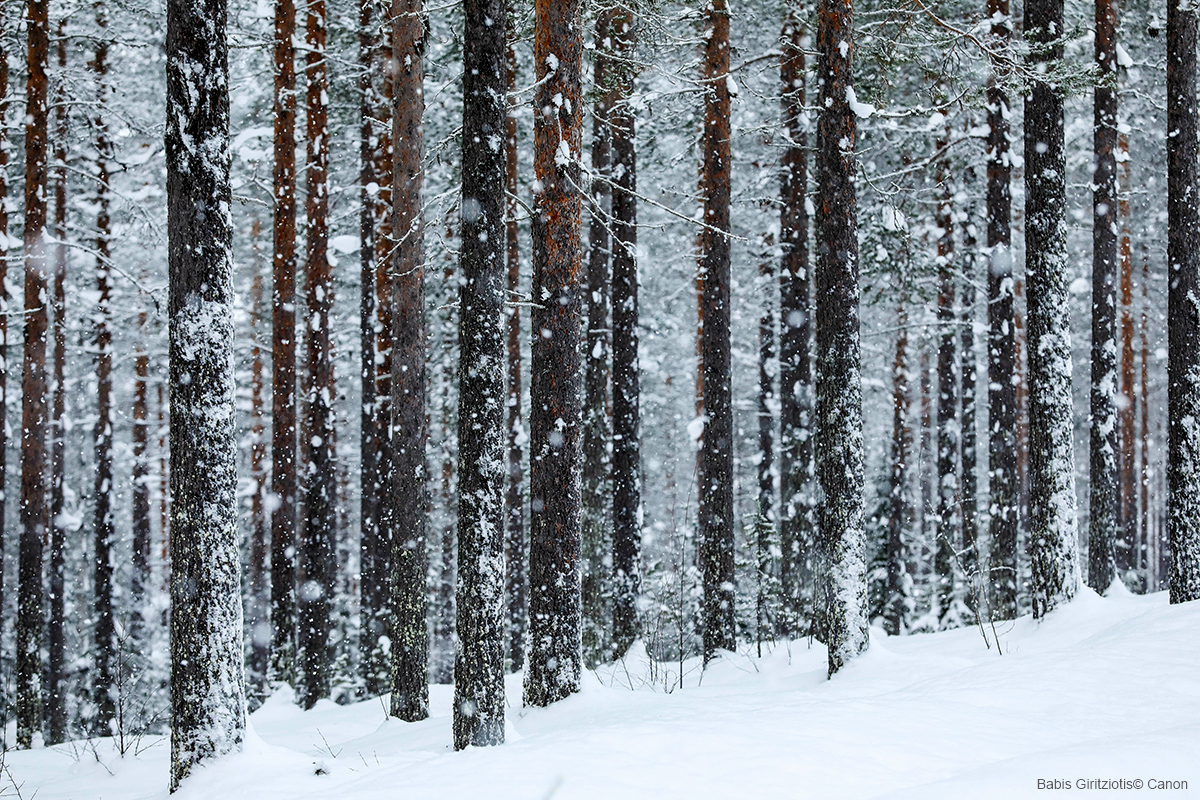 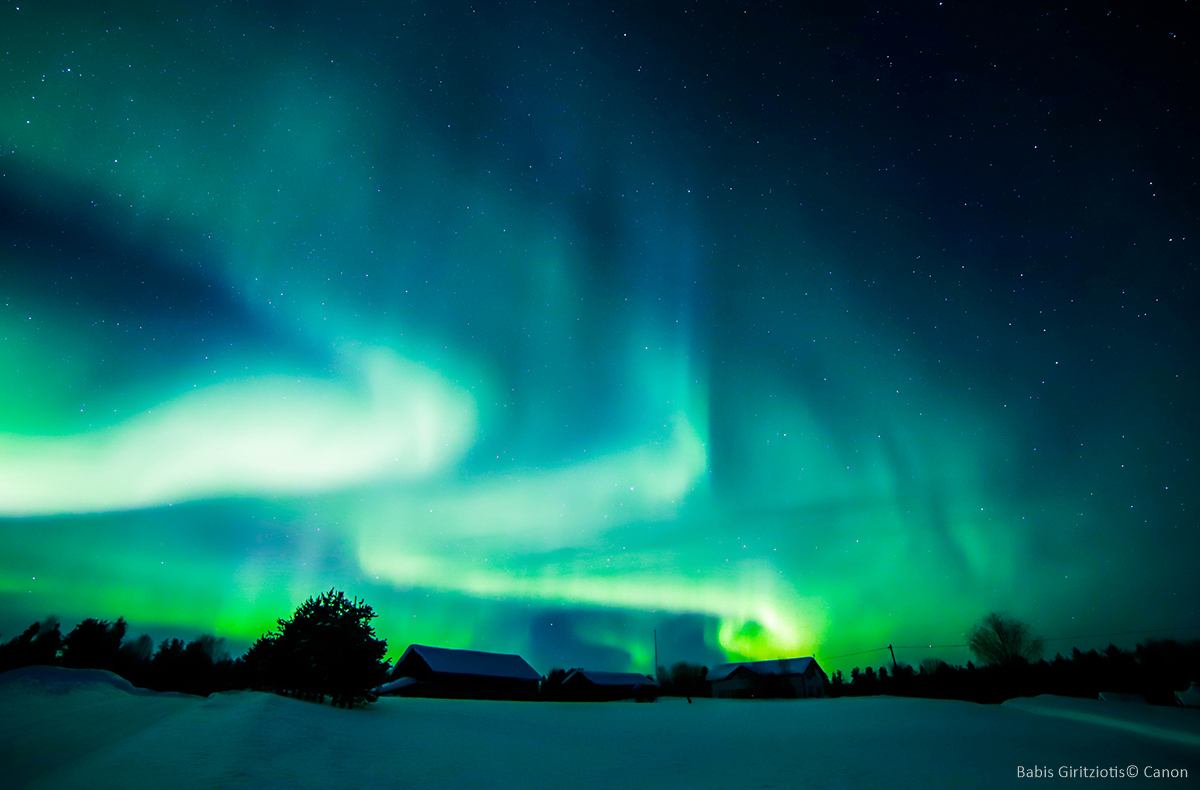 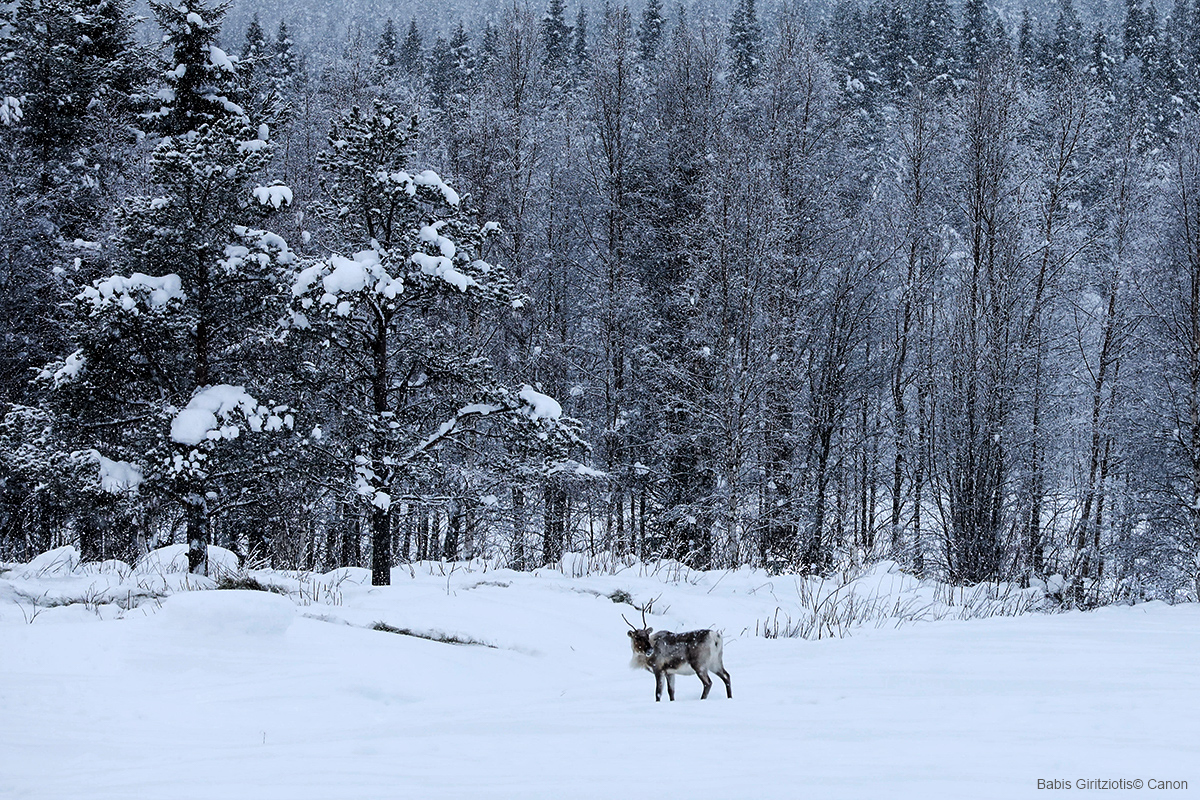 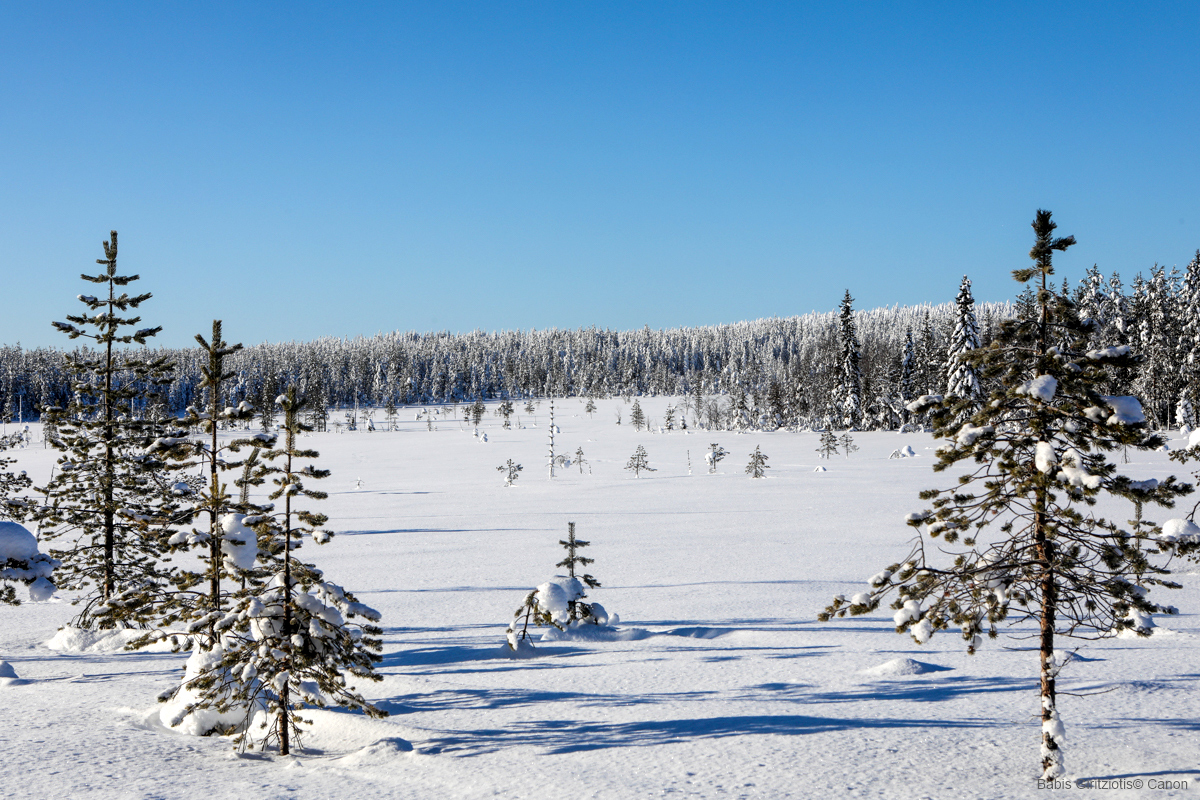